Home » Uncategorized » LOOK WHAT CAME IN THE MAIL

LOOK WHAT CAME IN THE MAIL

Back on December 31st I participated (off & on) in a craft World Wide New Year’s Eve 2012 Streamathon. The idea for this crafting streamathon was the brainchild of a few PITA Babes who get together online at the Paper Phenomenon web site . . . The co-ordinators for this event were Ozegran (Australia), Art Journey (UK-Europe), MusicScrp (Canada) and Mitzi (USA). . . it started at 11:30pm (Australian time) with Jen (Ozegram) teaching a 2013 monthly pocket planner and ended with Joycee (the Frugal Eclectic) in the US . . . during the 24 hour period various crafty people shared with us some wonderful techniques, held quizes on various crafty happenings around the world and held drawings for some wonderful prizes! The Queen even made an appearance and danced the “Gangnam” on the Art Journey (Lily’s) Ustream!!!! Well you guessed, it I was one of the lucky winners of a prize during the time that Nicky (Inky Minxy-The Altered Zone) was streaming from England . . . Nicky was teaching how to do hand printing without a press by using a product called “Gelli Plate” and giving away four pendants she had made as prizes . . . here is a picture of what I won . . . 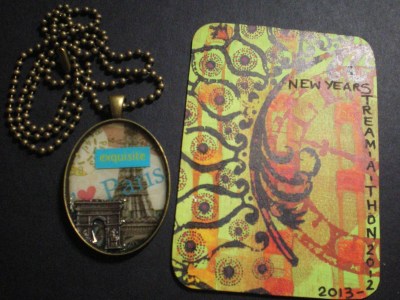 Nicky not only sent me (at her own expense) the beautiful pendant, but she included a ATC she made from one of the printings she had demonstrated!!!!! Even if I had not won a prize the Streamathon was a blast and I look forward to seeing it next year. If you are interested in seeing what it was about here is the link to recorded programs on Jen’s blog . . . Well, that’s all for now . . . thanks for stopping by and until next time . . . Hugs & Kisses . . . LindaB

By YaYaLadybug in Uncategorized on January 16, 2013.
← DECEMBER HAPPENINGS IN JANUARY TALENTED FRIEND →