Home » Uncategorized » ONE OF MY HUSBAND’S MANY TALENTS

ONE OF MY HUSBAND’S MANY TALENTS

My husband, like all husbands, has a hobby . . . I like to call it a “gift” . . . he just thinks his hobby is out of necessity. He does not play any sports on a regular basis (even though through the years he has participated in various sports such as softball, tennis,volleyball, golf) – nor does he hunt or fish. Now I know you are asking what does he do beside watch the San Jose Sharks hockey team? What is his hobby? Well, he loves to work with WOOD!!! He is right in thinking that his hobby originally started out of necessity – like all newlyweds we needed bookcases (he was still in college when we married) but he had no tools and we had no money. He was not raised around anyone who worked around wood or even did home repairs (his parents always had a handyman/gardener). He never took woodworking shop in school, but oh what a natural gift he has. We still have one of the two bookcases he made (our daughter has the other one). I could list all the many items he has made over the years, not only for his home and family but for our church, our friends, even strangers in need . . . he loves to work with wood and I have to admit that I take advantage of his talent . . .

I want to share a couple of his recent completed projects that he made:

Above is a picture of the mirror image “chest of drawers” he made for our remodeled master bedroom. What is truly amazing is that he only had a picture of one set of drawers that I had torn out of a magazine about ten years ago. I had forgotten that I wanted him to make me two of these sets drawers instead of one, but he did not. I truly thought it would be too complicated for him. Oh yea of little faith . . . he did it!!!!!! And they are very beautiful (my picture does not do them justice). They fit the space perfect . . . but guess what – he didn’t stop there. He went on the build the below pictured seating bench for the end of our bed. 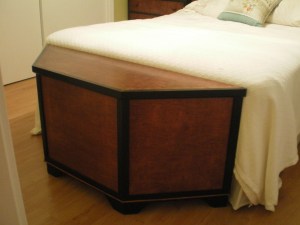 Now this is no ordinary seating bench to throw the pillows & bedspread on, oh no it has a secret, it is actually a dirty clothes hamper. Is that not cleaver and look he made it match the design he created for the “chest of drawers. Like I said at the beginning, my husband has a true gift . . . he has already begun drawing up the plans for his next little project and I will share it when it is completed.

That’s all for now . . . thanks for stopping by and getting to know a little more about my dear hubby and one of his many exceptional talents . . . till later, HUGS & KISSES . . .

P.S. . . Oh one other thing, he now has lots and lots of tools, so many in fact that we cannot get the car in the garage and every time he starts a new project-he needs a new tool (kind of reminds me of me and when I scrapbook-hehehe) . . .

By YaYaLadybug in Uncategorized on September 29, 2010.
← FALL IS IN THE AIR PROPER GENTLEMEN →