Home » Uncategorized » A MONTH IN REVIEW

A MONTH IN REVIEW

Hi Everyone . . . I cannot believe that another month has flown by . . . I mean really, where did all the time go for the month of March . . . I felt like I got nothing accomplished, that is until I looked at my calendar — LOL I was busy . . . that being said I decided that I would share a little bit of what took place during my life in the month of March . . . soooooooooo grab something to drink – go potty because this is going to be a loooooooong one . . .
It all began on Thursday, February 28th . . . we were at the Tank watching the San Jose Sharks vs Detroit Red Wings hockey game . . . 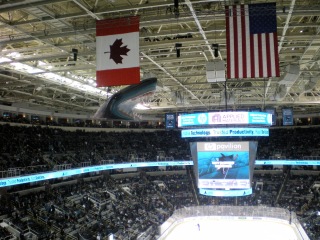 And while hubby and I were done in San Jose, I was able to take a live class being taught by the  talented Stephanie Ackerman at Scrapbook Island on Saturday, March 2nd . . . her class was called “52 Card Pick Up” . . . Stephanie also offers this class on-line and you can check it out here . . . 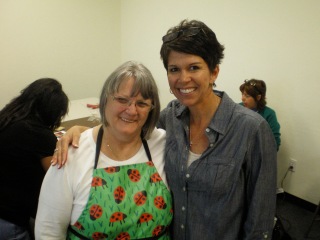 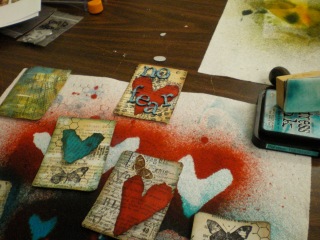 Now you may think that I would have a quite Saturday evening, LOL, but nooooooo . . . because the majority of our family is down in the bay area I contacted everyone before we left Oroville and we celebrated my hubby’s 65th birthday a few days early (his b-day is March 7th) . . . our son hosted a family BBQ at his home . . . 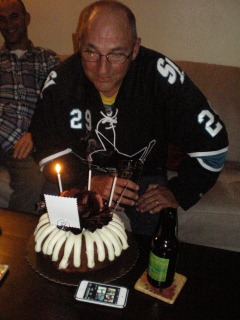 We now leave the bay area with the promise to return soon (which turned out to be sooner than we thought-LOL) and have a few quite days at home . . . the reason it’s quite is because I have to renew my Notary so I am studying (cramming) for the Notary Public exam I have to take on Friday in Rocklin (1-1/2 hours away).  It met spending Thursday night in Rocklin as I had to be at the seminar at 7:15am  (BTW I just got notice this past week that I passed the test with a 96-YAHOO!!!) . . .
During the next week I began working on a new project . . . I had decided to participate in an ATC swap with 11 other women . . . we are from all over the world and we know each other only on-line though Kathy Orta’s site, Paper Phenomenon . . . this is my very first ATC swap and I had to get 12 ATC’s done and in the mail to Canada by March 20th . . . right now I will only show you the back of the cards I made for everyone — I don’t want to spoil the surprise for any of the other swappers . . . 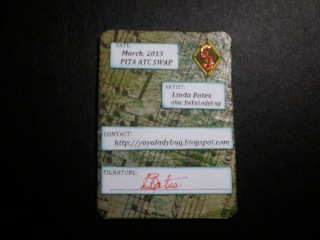 Moving right along, on Saturday, March 16th I spent the evening at one of my LSS, Paradise Scrapbook Boutique celebrating St. Paddy’s day with a few of my wild & crazy friends . . . 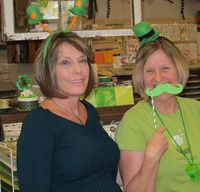 Next up, it is time for the annual egg dying party with my granddaughter and friends . . . 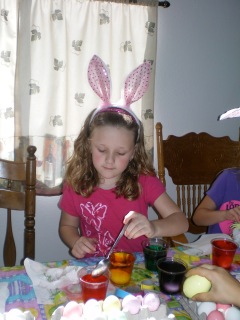 LOL – I don’t know which stains my hands more, dying eggs or using Tim Holtz products.  The egg dying always starts out nicely but soon gets out of control – hmmmmmmm same thing happens when I use TH and Dylusion products – LOL . . .
Well, believe it or not we are coming to the end pretty soon . . . just one more thing . . . we found ourselves back down in San Jose for Easter weekend . . . my son’s girlfriend owns a high end consignment shop, It’s A Girl Thing and I make speciality flags for some of her customers, like this one

Oh and while we were down there we attended another San Jose Sharks game as the guests of It’s A Girl Thing (she had her name advertised on the Jumbo Tron during a game break) . . . 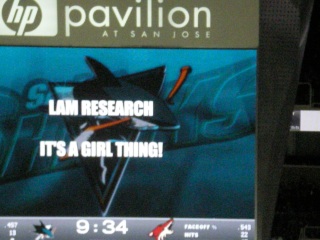